“Anezka was born with a VACTERL syndrome that includes an esophageal atresia with tracheoesophageal fistula. She had her first surgery on the second day of her life, her esophagus was connected and the fistula closed. Because of the surgery, Anezka suffered from severe reflux and was unable to be fed orally. Thus, she had her second surgery and her jejunostomy was placed. Since then she was fed via a J-feeding tube continuously for 20 hours a day. She slowly became dependent on her feeding tube, developed an oral aversion and did not eat normally for 10 months. In May 2021 we contacted NoTube and joined their Netcoaching program. The start was tough, for Anezka and also for us as parents, but after a few weeks the situation rapidly improved and Anezka started to tolerate more and more food orally. She also started moving more, as she didn't have to be connected to the pump all day long anymore - she started to sit on her own and crawl and became more and more active. Then, finally, in July 2021 she got her last tube feed and we never needed the tube anymore. We also received an early Christmas present that year and her tube was definitely removed in mid-December. Now at her age of 19 months, she is a happy tube-free baby, starting to finally walk and she enjoys every kind of food very much.

We are overall very happy we decided to join the program. It was one of the best decisions and we will never stop being thankful to NoTube for their help.” 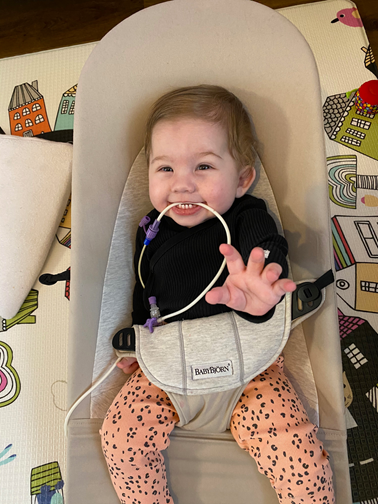