Mia and her parents live in Germany. Mia has Down syndrome and was born with complex cardiac problems. At the age of six months, she received a nasogastric feeding tube, followed by a PEG feeding tube a few months later. As a result of the long-term tube feeding, she developed a tube dependency. She vomited several times a day and showed no appetite. She displayed signs of a severe oral aversion. When she did get food in her mouth, she wouldn’t swallow. Previous tube weaning attempts failed. The family decided to come to NoTube in March 2021 to join the Eating School. Within a few weeks, Mia started to eat and, finally, even began to swallow! She increased her appetite and her oral intake sufficiently so that all caloric tube feeds could be stopped by the end of April. Two months afterwards, her water tube feeds were stopped as well. Since that time, she has been sustaining herself fully orally and enjoys eating. Today, her family's quality of life has continued to improve, and they are enjoying every step of progress Mia has made in her eating.

After her heart surgery at the age of six months, our daughter Mia was fed via a nasogastric feeding tube for seven months and then via a PEG feeding tube for another two years. During this period, Mia had completely refused food orally and had vomited several times a day. Tube feeding was also a torture. She resisted everything that had to do with food.

We were very desperate because we had already been through countless therapy attempts. NoTube was our last chance. In March 2021, we were at the Eating School in Graz. The two weeks there were a huge challenge for us. But we received great support and felt we were in good hands. During the two weeks of the Eating School, Mia learned to accept food, but she would not swallow it yet. A big success, however, was that the vomiting had stopped completely. We were motivated to continue after the end of the Eating School. Back at home, we continued to get excellent support from the team via the online platform. And after two weeks, Mia succeeded. She began to swallow. She rapidly increased her oral intake and within three weeks all nutritional tube feeds were stopped. Mia has been a completely different person ever since, so full of life and happy. For our entire family, a whole new life began with better quality of life and so much more joy in everyday life. 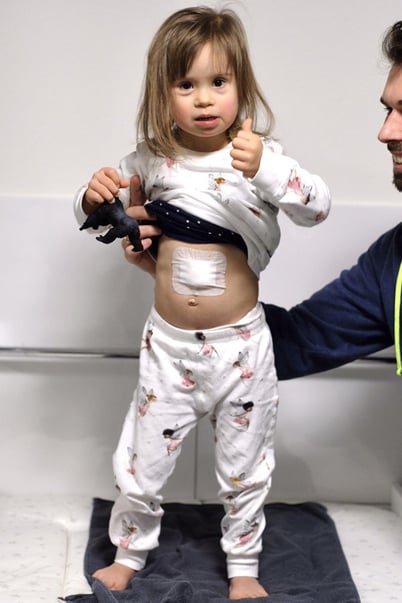